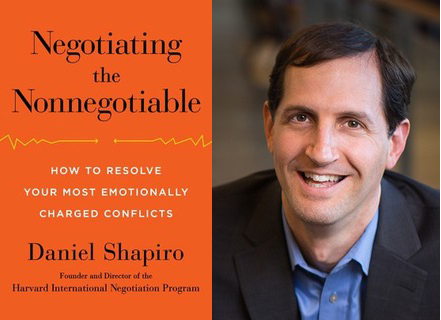 Hear Harvard professor Dan Shapiro discuss his timely book, Negotiating the Nonnegotiable: How to Resolve Your Most Emotionally Charged Conflicts, on March 10, 5pm PST, via Zoom.

The founder and director of the Harvard International Negotiation Program, Professor Shapiro teaches a highly evaluated course on negotiation at Harvard College, and he has been named one of the top 15 professors at Harvard University. He specializes in practice-based research: building theory and testing it in real-world contexts. He has launched successful conflict resolution initiatives in the Middle East, Europe, and East Asia, and for three years chaired the World Economic Forum’s Global Agenda Council on Conflict Resolution. Focusing extensively on the emotional and identity-based dimensions of negotiation and conflict resolution, Shapiro led the initiative to create the world’s first Global Curriculum on Conflict Management for senior policymakers as well as a conflict management curriculum that now reaches one million youth across more than 20 countries.

This talk was organized by Harvard Alumni Association Speakers Bureau and a consortium of west coast and international Harvard Clubs.

Pre-Registration at our sister So-Cal club site is required.  Please click on the following link to sign up: